The small history of the company

The thought comes to mind that it is time to start my own business, especially since the current job doesn’t offer a lot of challenges anymore and so new job ideas need to be found. Friends and acquaintances have agreed that catering is the only path for me, but the financial risk is high. However, thanks to great people such as Anita Halft of the Center for female start-ups in Siegburg many obstacles are overcome and the project “self-employment” is beginning to take shape.

This is the day – the business is officially registered, space has been leased and the renovation of those rooms is in full swing!

A big “thank you” goes to my parents who not only hugely supported this project financially, but were an enormous help with the renovation of the business space in Hennef!!! 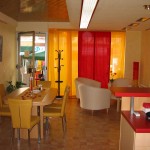 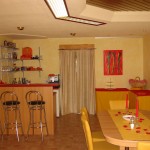 Hennef, Frankfurter Straße – the “Genussraum” ( a small event room) opens its doors. Having overcome a number of structural as well as administrative obstacles, we can finally start and officially begin to work! Just in time for the big Hennef Street Fair we are able to present our new concept and show everyone in town what fingerfood is.

There are two sides to our concept: One is the classic catering, meaning we deliver food, sometimes in combination with serving staff. The other is the “Genussraum”, a small event room for private functions of two to a maximum of sixteen people.

Most popular in the event room is our candlelight dinner for two as well as the  “Momente”-breakfast. Every friday is “taste time” – the event room ist open in the afternoon for people to get the opportunity to taste some fingerfood, to get to know our concept and to buy spices etc.

The start is tough – fingerfood isn’t well known yet and people tend to equate it with simple canapees. Quite often can be heard: “I’ll go away hungry since that can’t be enough to satisfy!” In the beginning the competitors are the local butchers with their partyservice and it is not easy to compete with them. 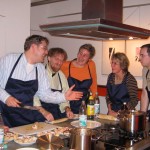 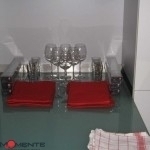 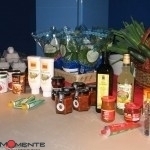 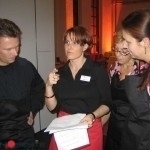 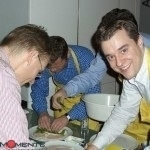 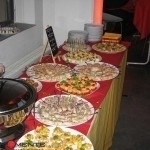 A lot of advertising, a number of different activities, constant networking and working more or less around the clock finally pays off.

We get to do great events for big clients such as company cooking classes where for teambuilding purposes the employees are devided into small groups and then cook together. Afterwards everyone sits together and enjoys what has been prepared. Or readings in the local book store where we serve accompanying fingerfood. Caterings at the “Haus der Geschichte” (House of history – a museum) in Bonn, for a mystery evening in Cologne, a lot of candlelight dinners for clients at their home and our event room is also booked on a regular basis…we are getting there!

And just as business is starting to really pick up, love gets in the way! At the beginning of 2007 I meet my husband, which in itself is no problem – just the opposite! But at the end of the year his employer informs him that he is supposed to move to Brussels. Now what? The decision is really hard, but made pretty fast anyway, because you can establish a business just about anywhere, but mostly you find the love of your life just once. Therefore, “Momente” goes to Belgium!

We say goodbye to Hennef!

We found a new tenant for the business space and all of the bokings have been completed. The last event, the farewell-party, is quite emotional – a lot of clients show up to enjoy my fingerfood for the last time and there are quite a few really nice presents as well as a lot of unbelievably nice words and good wishes. On one hand that makes me feel really good since it shows that all the work of the last years paid off, but on the other hand makes it the move not easier, because I will miss all this a lot!

“Hartelijk welkom in Vlanderen!” – the first event in Belgium! Even though it is a catering for a reception in our home, it is the starting signal for the continuation of the business here. Thanks to a lot of word-of-mouth advertising everything picks up quite fast and runs almost by itself.

Exciting new contacts develeop such as to the German ambassador to NATO where we, among other caterings, did the reception on occasion of the national holiday on the 03rd of October in 2009 and 2010. Those are events with 400 people after all and that is new ground as well as a huge challenge for me, too! But everything works out very well and I take along a lot of new experience! 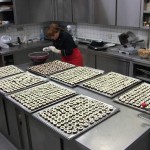 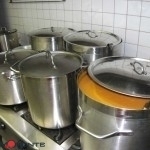 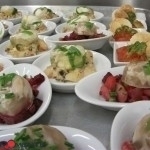 Thanks to this contact I am asked to cook in Moscow in 2011! The former German ambassador to NATO has become the German ambassador in Moscow in the meantime and his wife calls me over to cook for an event, where a NATO cookbook is presented that has been put together by the wives of the 28 NATO ambassadors. That means for me to prepare 28 different dishes from 28 different countries! We had done the same thing in Brussels, but in Moscow this is another kind of challenge! I have to cook in a for me totally unknown kitchen, ingredients are often difficult to find and the communication with the staff who, except for one, all only speak Russian is not easy. That makes the work really difficult. But in the end everything turns out great and the event is a big success. This is the start of quite a few stays in this absolutely fascinating city! 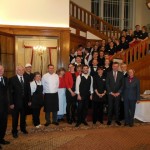 The last event in Moscow and also the highlight of the “Momente”-career so far was the national holiday of October 03rd, 2013! Cooking fingerfood for 500 people for lunch, two hours inbetween to refresh everything and then another reception for 800 people in the evening, the entire organisation of the service and also working throughout both receptions as overhead of the staff – that was really tough! That made the champagne that the ambassador and his wife treated me to afterwards taste extremely good!

I leave here also with a crying eye, especially because the staff of the ambassador’s residence has really grown on me. Great people that made all my stays there a lot of fun, despite the communication problems!

“Germany is calling” in the middle of 2014: my husband is being asked to go back and work in Koblenz. And then everything moves along really fast, as usual – confirmation from the German military at the beginning of June, start of work in Koblenz on September 01st. That did not give us a lot of time for house hunting especially when there is also a catering business to be moved. We finally ended up in…

Up till then I had only heard of Niederzissen from the traffic reports on the radio (there is always some kind of traffic jam) and when the internet put the number of people that live there at around 2500, I was not really sure whether this was a good place to live. But today I can truly say that it was a really good decision to buy a house here. Incredibly friendly people, a great neighborhood, beautiful landscape – we enjoy living here immensely! 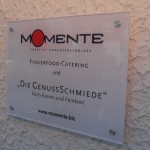 Then the business rooms were finally finished and that meant  that in addition to the the catering business there is now a shop again “Die GenussSchmiede” and that showed clearly: we had done everything right. This is so much fun!

We had a great time in Belgium and there are a lot of people and a lot of things that we miss, but who knows what awaits us in the future? We are really looking forward to a lot of new and exciting moments!

You can find out more about which cookies we are using or switch them off in settings.

This website uses cookies so that we can provide you with the best user experience possible. Cookie information is stored in your browser and performs functions such as recognising you when you return to our website and helping our team to understand which sections of the website you find most interesting and useful.

Strictly Necessary Cookie should be enabled at all times so that we can save your preferences for cookie settings.

If you disable this cookie, we will not be able to save your preferences. This means that every time you visit this website you will need to enable or disable cookies again.